When most people think of Ecuador, they are think of a beginner mountaineer’s high altitude paradise.  After one cuts their teeth on Mount Rainier, where better in the world to take it to high altitude?  Quito is vibrant city that never sleeps, the rural country side full of culture, the rainforest is close by and accessible to tourists, and you can swim with the turtles in the Galapagos.  Oh, and the volcanoes are right outside the city equipped with mountain huts that can be driven to!  Plus, the climbing season lines up perfectly with the holiday season’s vacation schedules back home.  That’s at least what I was thinking the first time I came here to climb Cayambe, Antisana, and Chimborazo a few years back.  (Unfortunately during that trip we only managed to get up Antisana, but that’s another story in itself.)

Upon arriving back to Ecuador for the second time, now few years later, I had all the same levels of excitement as the first, but with something very different in mind.  Technical climbs.  However, because of how poorly the technical climbs of Ecuador are documented, I had really very little idea of what I had ahead of me.  I knew the names of the mountains and the names of the routes, but at the time, I had no idea what the difficulty or technical grades were:

In theory, if Rainer has a Liberty Ridge, if Baker has a North Ridge, the volcanoes in Ecudaor should have cool things as well.  (It turns out that Cotopaxi is a close enough to a perfect cone that however approached it is still pretty easy, so that one doesn’t have anything technical really.)  My friend and guide, Nacho, assured me that the routes in our selection would indeed be cool.

How did you hear of it?

While climbing in Peru I met and Ecuadorian guide, Ignacio “Nacho” Espinosa Andrade (IFMGA), through The Skyline Adventure School.  Nacho and I really hit it off during our Artesonraju climb together, and on our way down, I asked him if he would ever consider guiding El Altar.  He was a little surprised when I asked him the question, and rather than responding, asked me how I had heard of the mountain.  This mountain really is a ghost, huh.

Well, it turned out that El Altar is kind of Nacho’s specialty.  He is one of the very few guides in Ecuador who are willing to climb it at all, not to mention while enjoying it.  He explained to me that even though Ecuador has the reputation to breed some of the finest mountain guides in South America, many of the mountain guides that stay domestic in fact get somewhat “domesticated” by the normal routes on Cotopaxi, Cayambe, and the likes.  I knew that if there was anybody I would want to go climb some difficult and poorly documented Ecuadorian peaks with, it would be Nacho.

I asked Nacho if was up for breaking up his upcoming season of slogging perfect cones.  I knew what his answer would be before asking as well.  I could make my way to Ecuador the following December or January, but I would have to squeeze everything into a pretty short period of time.  I’d have 15 days maximum in-country, I’d be coming from sea level, and ideally we could hit at least 4 mountains to make it all worth it.  We both knew these wouldn’t be an easy set of constraints for either of us, but he felt certain we could figure something out.

Over the next few months Nacho and I built out an itinerary that seemed aggressive but reasonable.

This would be my most aggressive acclimatization schedule (I live in Seattle, so pretty much zero elevation).  I dug up my old Diamox prescription I had sitting around for a year or so, and the expiration date said it was still okay to take.  Score.  For the first time ever, I would be taking Diamox to seriously aid in acclimatization.

I hopped on the airplane on the night of January 8 and popped a Diamox.  I had a few liters of water stashed in my backpack to hopefully survive me the flights without getting too dehydrated.  I’ve traveled a lot in my life on business and personal trips, so the 16 hour flight didn’t phase me.  I was mostly excited to finally get around to watching Deadwood (only 13 years late).

Upon arriving to Quito’s Mariscal Sucre International Airport, I was faced with the decision to either get a cart for $2 or play yet another game of can-I-balance-my-duffels-on-my-carryon.  For whatever reason, I am extremely cheap when it comes to paying for those luggage carts.  Sure I just flew here all the way from the USA, but hell no I am not paying that $2.  This time though, I packed my duffels in a subpar method, and I could just not get them to balance on top of my carryon.  I’d have to splurge on the cart.  I went for my wallet, and…oh no.  It’s not here.  Okay fine, that’s annoying that I won’t have my favorite international feeless credit card for this trip, but I am not new to this game and I have a backup credit card in my passport holder and lots of cash.  Oh, no..that’s not here either.

The luggage cart was now the least of my concerns, and now I was wondering how I’m going to function in Ecuador with no credit cards and no cash.  Well this is a first.  I sat down and thought.  I thought for a long time.  Well, at least I had my phone and my passport.  (I also had Bitcoin – does anybody take Bitcoin??)

Should I just buy a ticket home on my phone and fly back?  Oh wait, I forgot my United States Greencard.  I literally cannot go back home either.

I picked up my phone and called Nacho.  “Nacho, buddy, I need help.”  Nacho was definitely a good friend about it and dropped everything he was doing in the middle of the day to come pick me up.  He also drove directly to the bank to front me some cash so I could at least get around and eat.  Thank God for having a friend here.

Over the next few days, I truly explored every plan possible.  I ended up booking a new flight back to Canada (not my home, but my place of citizenship), my girlfriend shipped all my documents out to me, and my dad Western Unioned me cash.  UPS apparently filed the wrong paper work for shipping international documents, and United Airlines was having technical issues, so this collectively took around 35 hours and a whole lot of stress on everybody’s part to figure out. Shout out to my wonderful girlfriend, awesome dad, and Western Union.

To make things a little more pressing, I knew that I needed to get some acclimatization in, so I could not just hang out all day in my hotel room waiting on hold on the telephone.  I opted to go for a run.

The following day, Nacho called me with some bad news of his own.  He somehow got a violent stomach illness, and hiking up Rucu Pichinca would not be an option for him.  I told him no problemo, and that I would go for it myself.  I had already gone up a few years back, so I figured doing it myself would be no problem.  I made the mistake of reading some old internet posts from the early 2000s about the mountain being covered with banditos.  I figured I would only go as far as there were people.  It turns out, the government really cracked down up there, and now the only people are hikers, runners, and tourists.  I made it to around 4300m, ate lunch, and turned around.  I knew I had to get back to my hotel so I could sit on hold with the airline for another few hours.

The following day, Nacho called me and said he was feeling 99% better.  The expedition was finally on.

To read more about the climbs, you can check out their individual posts: “… Upon gaining the ridge we were presented with an amazing view of Illiniza Sur, our primary objective. The day was beginning to warm up, and the skies were clear. Climbing in Ecuador comes with the expectation of bad weather, so I was super happy that the mountain gods seemed to be on our side.” [read full, Illiniza Norte] 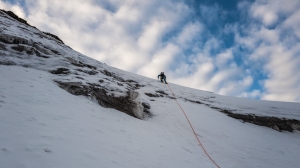 “… Illiniza Sur, Illiniza Norte’s far less popular yet much more difficult sibling, was our main objective.  Up until 2009, there were two routes up Illiniza Sur, with the most popular route being La Rampa.  As of 2017, La Rampa is pretty much just a melted out rock shooting gallery, so we would be using the other route.  Funnily enough, nobody really seems to remember what the current route used to be called back when there were two routes.” [read full, Illniza Sur] 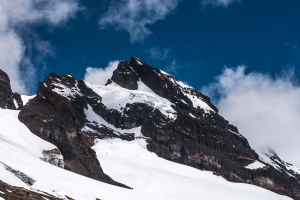 “… I knew that the trek in would be interesting when we stopped by a hardware store in Quito to buy rubber boots. We also made a quick stop at the grocery store to pick up 30 liters of water as the Campo Italiano has only a trickle of running water. It seems hard to believe at face value, but because the camp sits on a ridge, very little of the glacier melt is directed its way. Yet another reason wonder why this climb is unpopular, I guess.” [read full, El Altar, The Modern Italian Route] 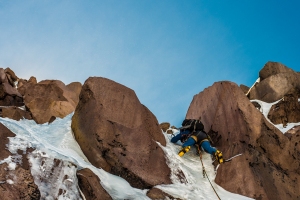 “… The glaciers away from the Normal Route of Cayambe are wild. They are rarely crossed, maybe once a year. The crevasses are legitimately big, so we left plenty of rope between the two of us, and we even had to pitch out a nasty sections.  We finally made our way to the base of the massive rocky spine running up the north side of the mountain.” [read full, Cayambe, Arista Santa Barbara]

Well, aside from the snafus at kick-off, this expedition was fantastic.  Each of the climbs was extraordinary and the acclimatization schedule was perfect.  Illiniza Norte was unexpectedly exciting.  Illiniza Sur’s climb is a classic snow face and a worthy challenge when first arriving to 5000m.  El Altar is wild, remote, and poses a very involved route.  Cayambe’s Santa Barbara Ridge is just a friggen classic, being very challenging and providing excitement all the way though.

I was sad to lose my GoPro on the summit of El Altar, as part of the allure of climbing El Altar and the Santa Barbara Ridge was to be the first person to film their ascents.  Nacho was also hoping to use the films as promotional materials for his services.  The mountains have decided to stay unfilmed for now, so may they continue to enjoy being the ghosts that they are.

GEAR: You can check out my gear list and full review here.

In the event that you would like to climb any of these peaks for yourself, I highly recommend climbing with Nacho.  Not only is he my friend, but he is also an extremely respected guide in the South American guiding community.