After arriving back to the beautiful Hotel Andino from my successful climb of Artesonraju, I laid down on my hotel bed and looked out the window toward the Cordillra Blanca.  It was a gorgeous day.  All my gear was packed, and in less than two days I’ll be back in downtown Seattle.  The comfort felt good, but off.  I knew that once I got back to Seattle, something in my brain would break if I just tried to get back into normal life.  I would, in a way, need to acclimatize back down to life at sea level.

My body was feeling really good after the past three weeks of climbing.  I was super acclimatized and did not sustain injuries other than a few scrapes.  A climb that had always been set in my mind as some sort of self-defined benchmark was the Coleman Headwall of Mount Baker.  I’ve climbed Mount Baker more times than I’ve tried to count, and ever since my first time breaking above the tree line of the Heliotrope Ridge, the headwall has struck me.  I distinctly remember the first time climbing Baker as a total noob, I was with Will Gordon from the American Alpine Institute.  I asked him, “Are we going to climb that?”, to which he responded something like, “Probably not, that is a pretty hard way to get up to the top”.  Will is a distinctly polite individual, I am sure he was thinking to himself “lol hell no”.  (Will is a great person and guide, and we have continued to climb together.)

Anybody who even considers this climb knows that this route is fraught with dangers and tragedy.  Popping over the Mountain Project’s route description, you’ll see that the comments are mostly talking about people dying.  Because of that, I did want to climb it with a pro.  As one would suspect, this route is not climbed very regularly, and most guide services do not offer it to clients.  I did, however, remember seeing it listed on one guiding company’s website: The Northwest Mountain School, whom I had never climbed with before.  I assumed that it would be a situation where I would contact them only to be met with a response that they don’t actually climb it.  Apparently I was wrong, because they responded with available dates.  Later, I learned that they book this climb but keep the North Ridge as a highly likely backup plan for those not fully prepared, and the Coleman Deming as an uber-backup plan for those woefully unprepared.

Two weeks after getting off the phone with NWMS, I found myself in Everett, WA at a QFC parking lot meeting my guide for the next few days, Chad Cochran.  (Chad later got a parking ticket here.  Don’t leave your car here.)  We hit it off well pretty quickly, and I knew that it would be a good two days.  As expected, I could tell that Chad was trying to assess me, and trying to get a picture of whether we would be climbing the Coleman Headwall or the Coleman Deming.  He graciously slipped in the factoid that he had only been hired to climb the Headwall three times in the past, and of all three times, the clients got to the base of the wall and decided to turn around and climb the North Ridge instead.  He himself had never actually climbed it, and I could tell that he was hoping to give it a shot.  We agreed that we would get to the parking lot, move up to our camp as quick as possible, set up camp, gear up, and go check out the base of the wall.  If he didn’t like what he saw with me or the wall, we would change the objective.  If I didn’t like what I saw, we would change the objective.  No hard feelings, no shame, just realism.

We got to the parking lot after stopping for some breakfast and coffee, and began packing up.  NWMS likes to keep a close eye on the safety of their guides and clients, so we chilled while his Spot communicator struggled to get a satellite message out.  As soon as we saw the LED blink with success, we began moving.  I have always personally really enjoyed the Heliotrope Ridge trail, it’s extremely well taken care of and always seems to have very few people on it.  In my opinion, it is probably the most underrated hike in the state.  However, we were still climbing in the middle of the summer, and it was no surprise to see a lot of parties once we got to the camp site.  Chad even chased down a run-away tent for a group.

Most people are on Baker to climb one route, the Coleman Deming.  We apparently gathered a bit of interest at the camp site when we pulled out our flashy ice tools and screws, as people came around quickly to ask us what we were climbing.  We got a lot of “you’re crazy” responses.  Ha.

Moving towards the base of the face, we could clearly see that the glacier was in above average condition.  The year had been great so far, lots of precipitation and lots of cold.  We basically beelined straight to the base of the route, weaving around a crevasses here and there.  We followed a reasonably fresh bootpack, which actually surprised us quite a bit because the Coleman Headwall is usually a route that gets some sort of internet trip report or tick when it is climbed.  We guessed that somebody who had not yet been inundated by social media must had stealth climbed it over the past few days.  Once we got to the bottom of the face, we could see the bootpack had spun around and gone back to camp.  Ha.

I’m not going to trash the bootpack people, because standing at the bottom of the headwall was quite awesome.  And by awesome, I mean in a way that inspires awe.  Huge seracs and bergschrunds guarded the route, and avalanche debris was littered all over.  Hm.

After deeper inspection, Chad and I could work out a line that seemed to hit all the weakest (as in, best for us) points of the headwall.  We could work our way through the bottom section that was the least affected by avalanche debris.  We could then work our way to the least gaping section of the first bergschrund, navigate to a section without too much overhead debris, and then climb up to the apparent narrowest section of the second bergschrund.  Above that, it was hard to see, but the overhead hazard seemed to vastly reduce.  I told Chad that he would finally be attempting the Coleman Headwall, and I would join too.

Chad and I had been moving pretty quick getting up to camp and checking out the route, probably with a bit of assistance of my acclimatization from the 6000m peaks I had just come off of.  We opted to wake up at 1:30am, a bit later than usual, but hit the ground running.  We indeed hit the ground running, and with our fresh bootpack from the previous day, we were at the base of the route in no time.

Stepping onto the route itself was pretty exhilarating.  It was something I had been dreaming of for the last few years.  Even more exhilarating was our high speed crossing of all the lower slope’s avalanche debris that we did not want to hang around in.  The climbing itself was mostly on perfect steep neve snow, and was something that we could just keep moving on.  This perfect neve was broken up by three big bergschrund crossings.  I could tell when Chad would reach to the base of one, because the rope would just stop for a few minutes.  I could even distinctly hear him saying “What the heck..?” at some point.  The bergschrunds were actually pretty challenging to overcome.  One that required a little jump onto an ice wall (Vertical Limit!!).  One that required a bit of overhanging ice.  And another that required climbing through an obscure vertical ice tunnel.  Although not very steep as a whole, I could see how this route is rated as an AI5 in technical difficulty.  The overhead hazard should not be underestimated as well.  Even with us choosing the safest looking line possible, stuff was still zipping over our heads as the sun began to warm the glacier.

We topped out the difficulties of the route, high fived, and stopped for a good long break.  We hadn’t really taken any “official” breaks until then, so we got a chance to bust out some better food than the Gu pouches I had been downing the whole time.  We didn’t know what time it actually was because Chad’s watch had broken a couple days before and my watch was apparently jetlagged/confused between time zones after coming back from Peru.  The sun hadn’t been up for too long though, so we knew we made it in good time. 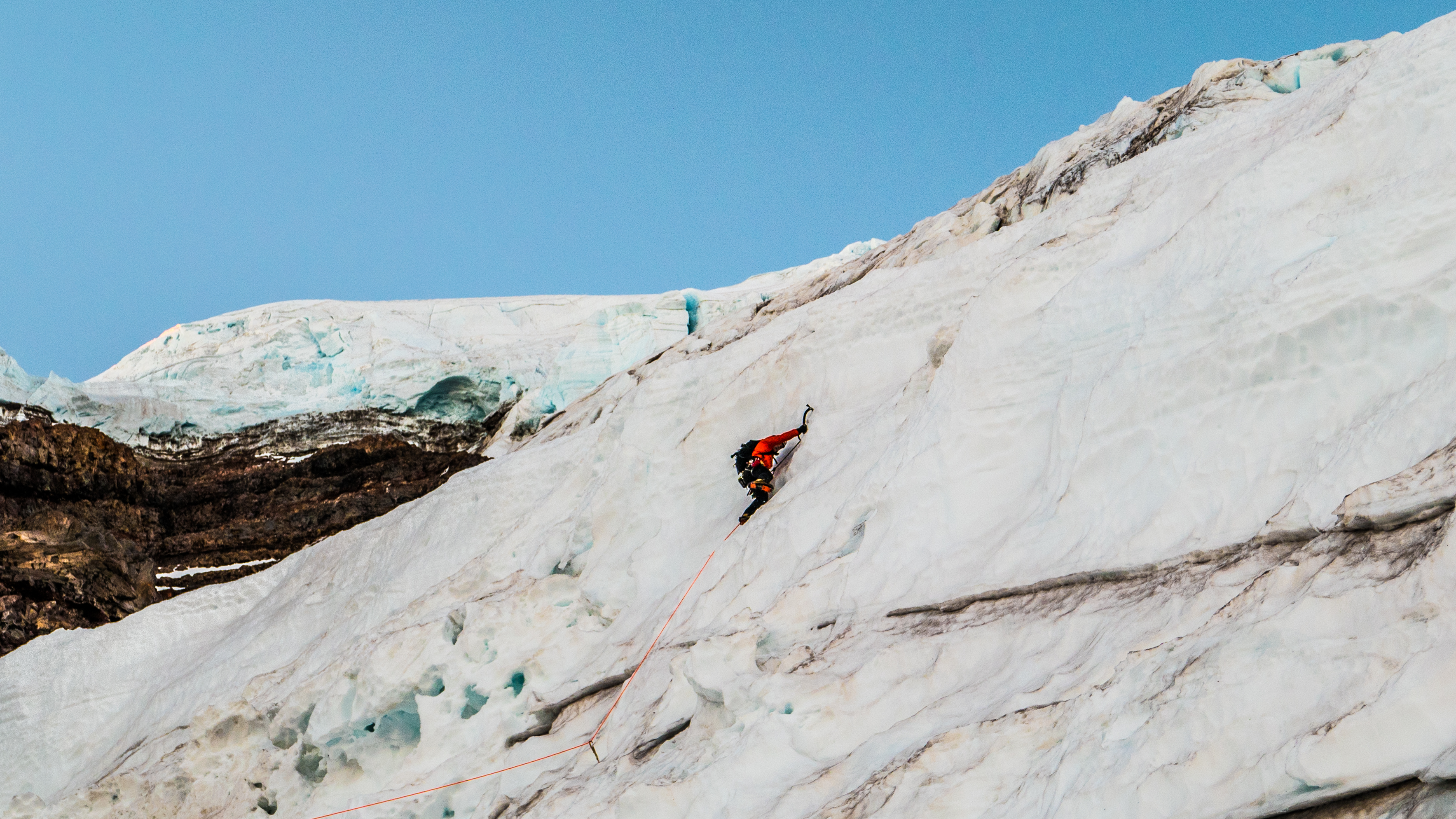 Coming off the route, I felt really good.  Physically, I was feeling awesome.  Mentally, climbing a hard route like this somehow helped ease me into a better place after all the intensity I felt coming off Artesonraju.  The only thing that really bugged me were the hot spots that developed on my heels.  I had never really had a significant blister before, but this climb changed that.  I now feel bad for blister people, because the blisters really sucked for the next couple weeks.

For all the times I claim to have climbed Mount Baker, I have never actually literally sat on the summit of the peak.  I’ve always turned back after stomping around the upper plateau for a few minutes.  Chad and I figured that after doing all we did, it would be a shame to not actually touch the summit.  Plus, now I can say that my first summit of Mount Baker was via the Coleman Headwall.  Sounds pretty legit to me. 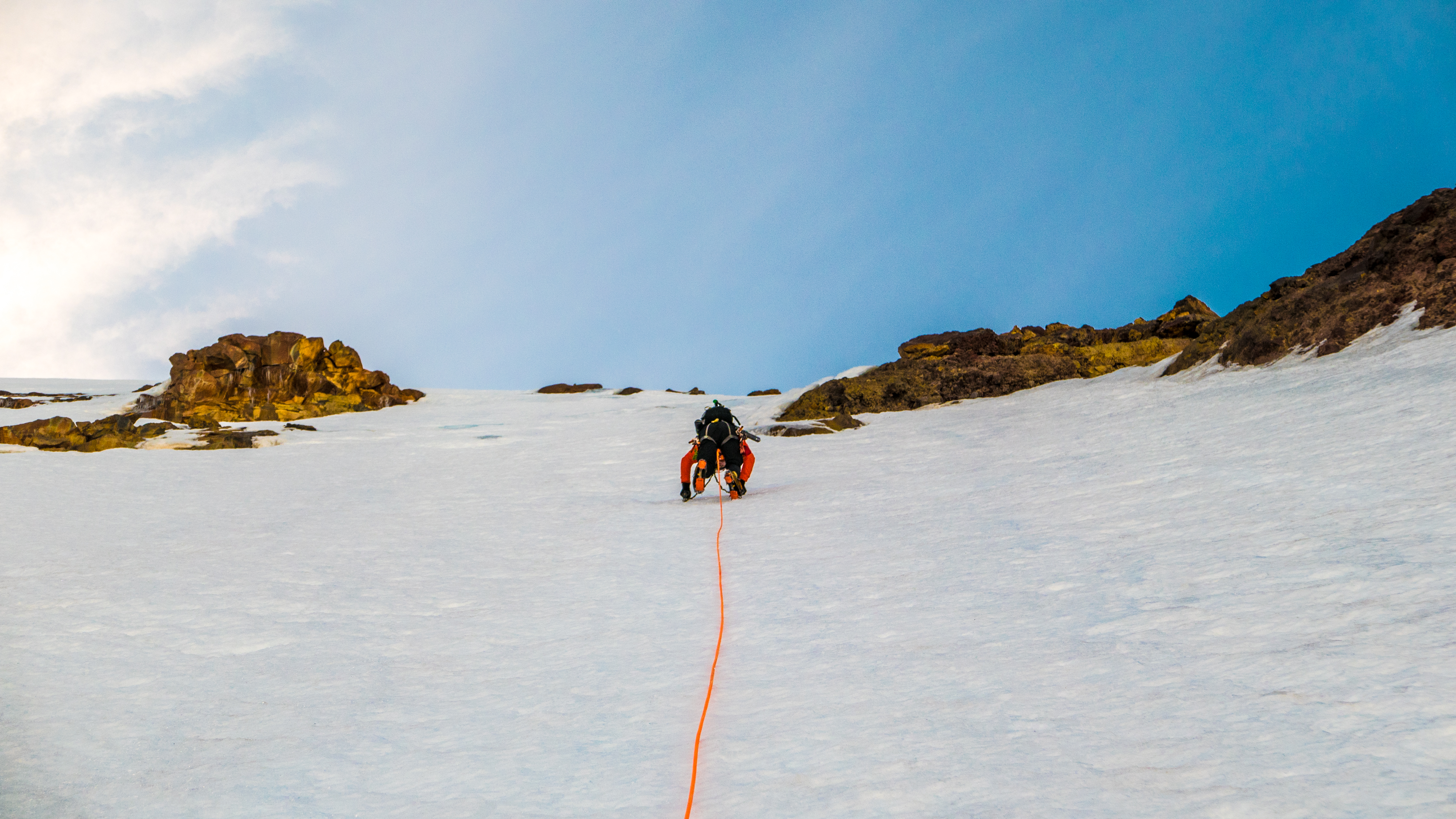 Up next, another big Cascade face!

Somewhere on the internet I read that people could climb Shuksan’s North Face in a long day.  I knew that would probably be a bit extreme, so I figured 2 days would be optimal.  I sent Chad a message with my timeline and he said he would really prefer to do it in 3.  In fact, he would truly prefer to do it in 4.  In hindsight, 4 would have been nice.[…]