Illiniza Norte is part 1 of 4, in Ecuador the Hard Way

To be honest, I came here prepared to be underwhelmed by Illiniza Norte. In fact, in the itinerary that I worked up for my family, I listed the day’s activity as “hike” rather than “climb”.  The only reason I had asked Nacho to come up here was to help aid my extremely aggressive acclimatization schedule, and because we would already be here for our Illiniza Sur climb.  I was pleasantly surprised by how much I enjoyed Illiniza Norte, and I believe that it is a worthy climb in its own right.

I had only been in Ecuador at this point for 2.5 days, and I was now going up to sleep at 4700m.  I live in downtown Seattle, so basically sea level.  This would be my fastest acclimation plan ever.  I’d been taking Diamox for the first time though, and I had definitely been peeing a lot, so maybe it was working..?

Driving to Illiniza are highway signs that say “Illiniza” all the way to the parking lot at the trail head. Aside from running into an old friend, Romel, who locked his keys in his car at a gas station we happened to stop at, driving to Illiniza is pretty uneventful. We anticipated running into some Monday morning traffic, but there wasn’t too much and we arrived to the parking lot at 11:30am, ahead of schedule. Luckily the horse guy was there early too – horse traffic must have been light too. We weighed our bags, handed him $20, and off we went.

We would be staying in the Illiniza refugio, which is a few hour hike from the parking lot.  The hike itself is beautiful, but apparently is often quite humid and rainy.  It’s this exact humidity and rain that has maintained the glaciers on Illiniza Sur though, so we should all be thankful for it.  While moving upward, we ran into about five different climbing parties coming down. From talking to them, it became abundantly clear that Illiniza Norte was the favorite child among these two siblings. 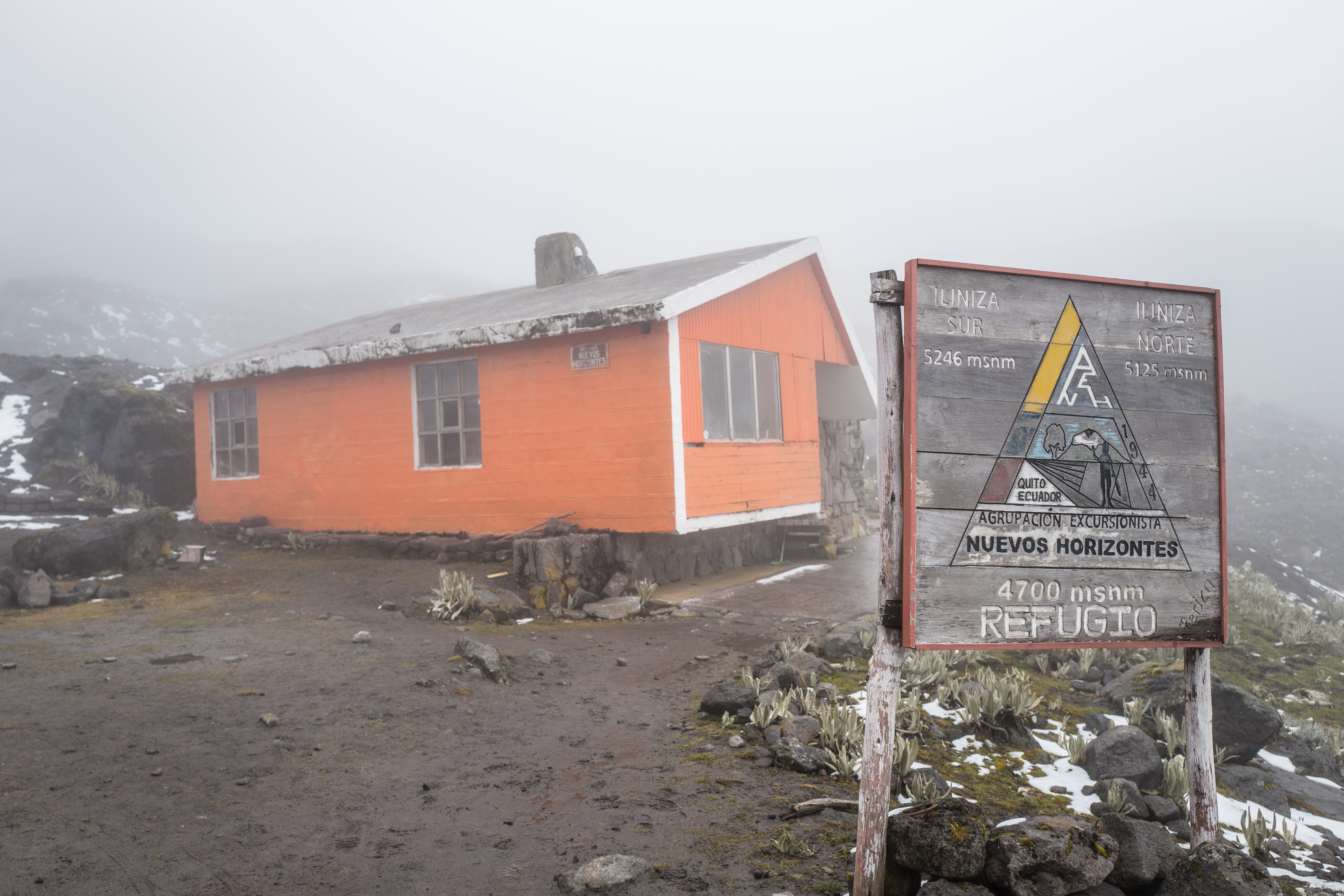 The refugio itself was modest, but definitely a welcome shelter from the elements.  We were the first group to arrive for the evening.  Nacho knew that the roof leaked a tiny bit from condensation, so we quickly claimed a couple bottom bunks before the other 14 anticipated climbers showed up.  Freddy, the hut manager, warmed up a bit of soup and boiled water for tea.  My rule of thumb in the mountains is to just get as much sleep as possible, and I was already getting a little cold, so I crawled into my sleeping bag.  I managed to go in and out of sleep for a little bit, waking up while more climbers trickled into the hut.  I eventually woke up for an early dinner which we shared with the rest of the climbers, chatted for a bit, and then went to my bag.

Sleeping at 4700m while basically not acclimatized at all was something I had worried about when building out our schedule.  Usually I can deal with a night or two of no sleep, but last time I had been to Ecuador, I spent 4 days in the Cayambe Hut without a minute of sleep.  That was rough.  This hut specifically has a bad reputation for sleeping due to the high elevation, the tightly shared space, and very possibly the propane burner with poor ventilation.  My body was loaded with Diamox along with a long list of other supplements and over the counter medications. Pharmaca de Chris was definitely in full effect.

I did fall asleep pretty quickly. The sleep wasn’t sound by any means. More of an approximation of sleep, really.  I spent the night in a daze between being awake, sleeping, and dreaming, unable to be certain which one I was experiencing at any moment.  I really only knew that I got sleep because every time I woke up I checked my watch to see how long it had been since I remembered checking my watch last. Once morning rolled around, I actually felt pretty good. I definitely didn’t have the worst night in the room.

To be honest, I came here prepared to be underwhelmed by Illiniza Norte. In fact, in the itinerary that I worked up for my family, I listed the day’s activity as “hike” rather than “climb”.

We set our alarms for 6am with the intent to begin at 7am. Nacho figured that we could probably nail the round trip to the summit in 3-4 hours.  I was a bit skeptical about that considering that would only be my 3rd day since sea level, but I wasn’t about to argue with the late start. The big German group dominated the single breakfast/lunch/dinner table, so Nacho and I figured we would let them start before us. We’d then eat breakfast rather quickly, and then skirt past them in the lower rocky section.

Before getting halfway through my bowl of cereal, the Germans walked back in, sat down, poured coffee, and claimed that they had made the summit. Wow, this really is a fast climb! The reality of the situation was that the path was a little more frozen than they felt comfortable with so they would wait for the sun to thaw things out a bit. Nacho and I figured we were slightly more hardcore and could brave whatever ice lay ahead of us – heck, we came here to climb ice anyways! To the Germans’ credit, the path was slippery as hell. We quickly saw that it was from a leaking water pipe feeding to the hut, so we carried on. 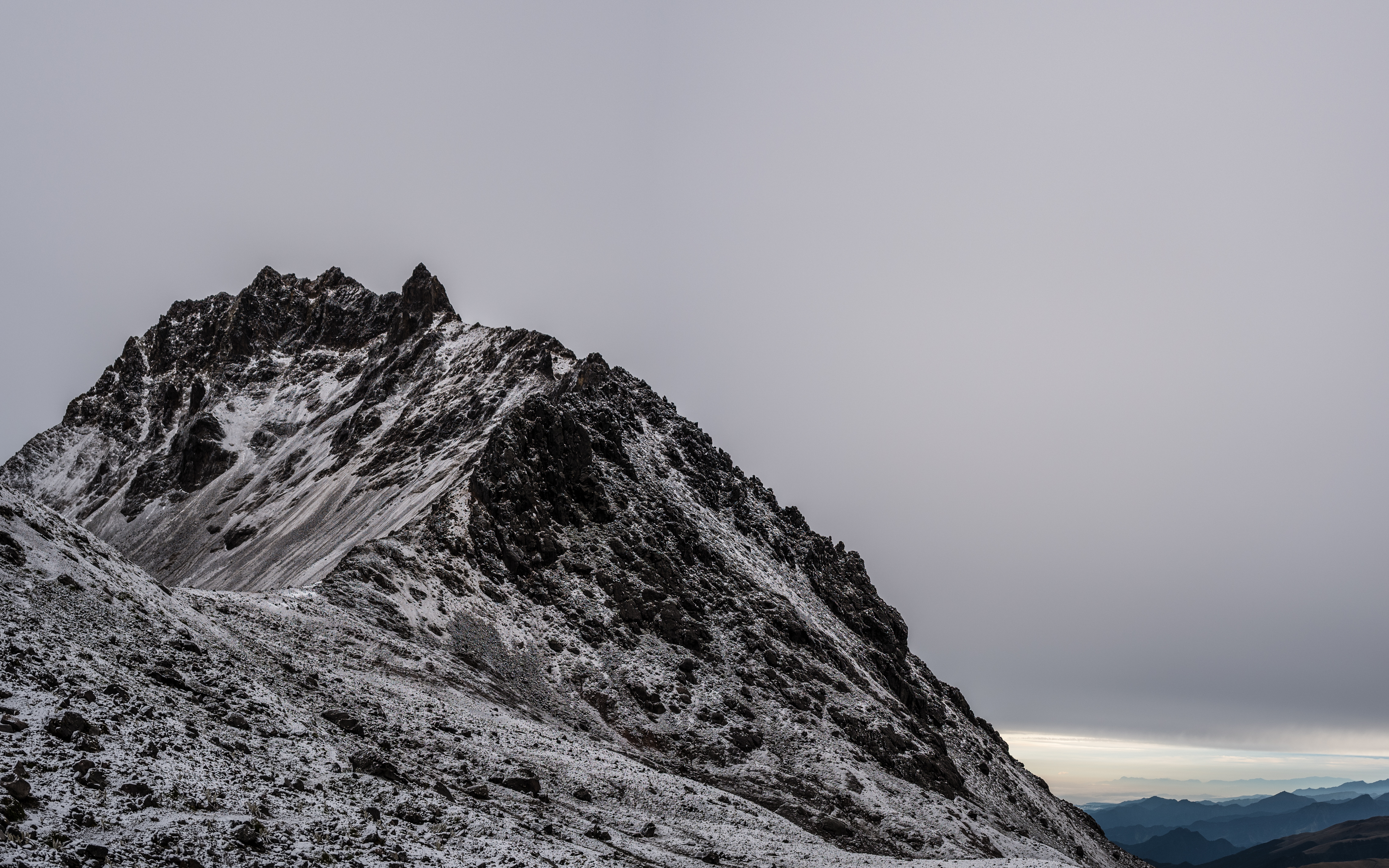 But what are we wearing?

The climb started out quite cold, I had a couple of layers on which is pretty rare for me. My only layer I had remaining in backup was an ultralight down jacket, so I was doubting my layering decisions pretty seriously.  Once we gained the ridge and the wind set in, I was really doubting my layering choices.  If the cold continued to proportionally increase with the elevation, there was no way I had enough warm layers to keep going.  I’d have to turn around.  In hindsight, it is a well-known fact that hypoxia can lead to hypothermia.  Being this cold could have been a result of my aggressive acclimatization (or lack thereof) schedule.

As we made our way onto steeper and rockier terrain, I also began doubting my boot choice.  Whenever I come to South America, I have always just packed my La Sportiva G2 SMs – a great high altitude double boot that is best in class for climbing and warmth.  When things get cold, those are the boots I trust.  However, I always forget that I can have 140lbs of luggage weight allowance for the flight and horses to carry whatever I want up to basecamp.  Taking a set of more technical boots for warmer days is something I should do in the future. 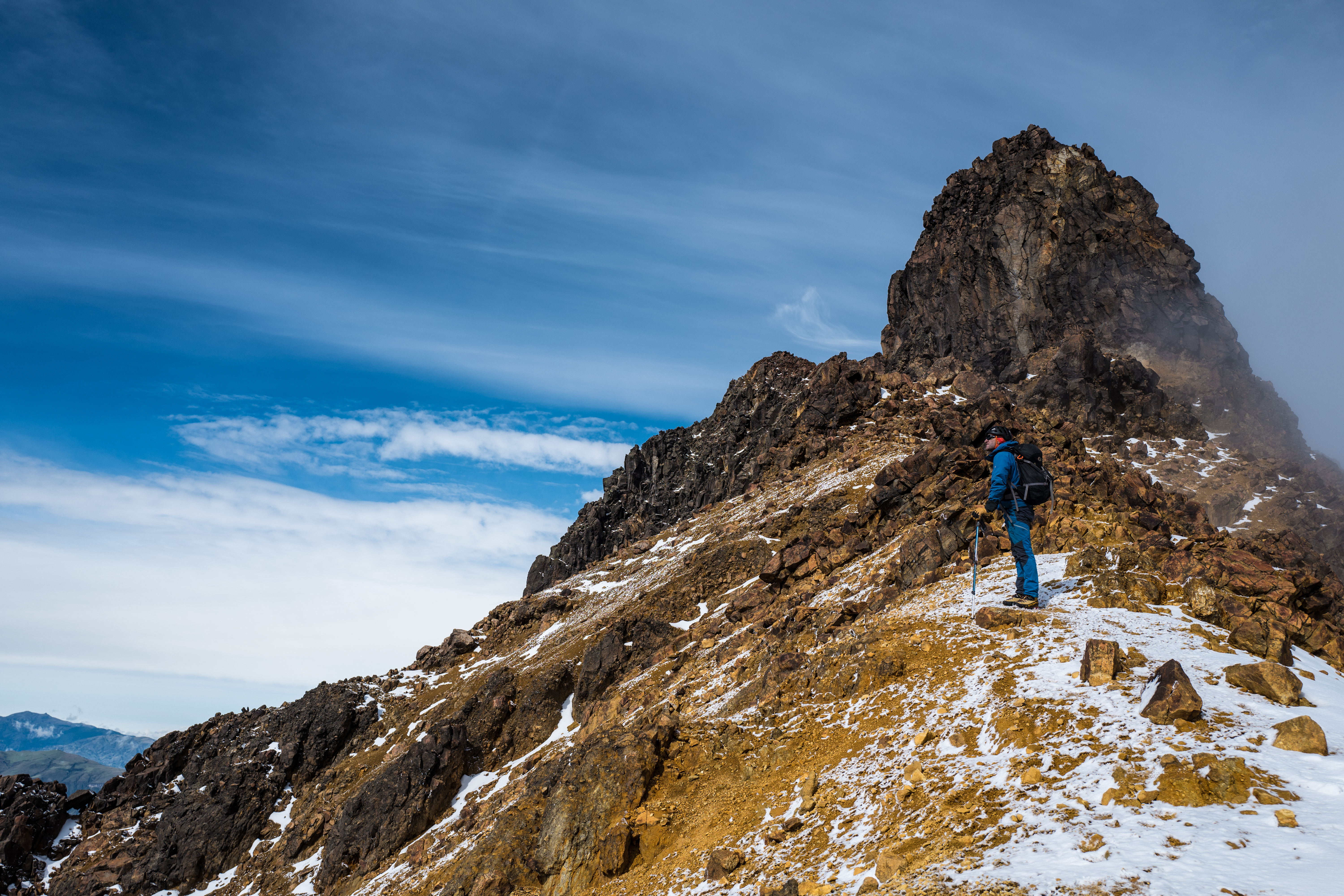 Upon gaining the ridge we were presented with an amazing view of Illiniza Sur, our primary objective.  The day was beginning to warm up, and the skies were clear.  Climbing in Ecuador comes with the expectation of bad weather, so I was super happy that the mountain gods seemed to be on our side.  I up towards Nacho, “A quarter of our climbers have good weather! We are beating the odds!”

The terrain actually got pretty dynamic as we continued higher up the ridge. There is a lot of very exposed crossings over couloirs and sections of solid class 4 rock almost bordering on 5th.  I think this is a mountain that people undersell in challenge a little bit. It’s not that it is particularly difficult, but there are significant portions were if you slip you will certainly die. If this was in the USA there would probably be a few anchors, and if it was in Chamonix it would probably be bolted.

On our way down, we passed the two Canadians we met in the hut on their way up.  They were initially only planning sleeping in the hut to acclimatize to acclimatize for Cotopaxi, but with everybody else climbing, they apparently wanted to join the party.  They unfortunately only brought their trail runners, and they looked pretty unstable crossing over a snow filled couloirs.  I don’t think I would have gone for it if I were them. But hey, I’m not very hardcore. (I lied earlier.) 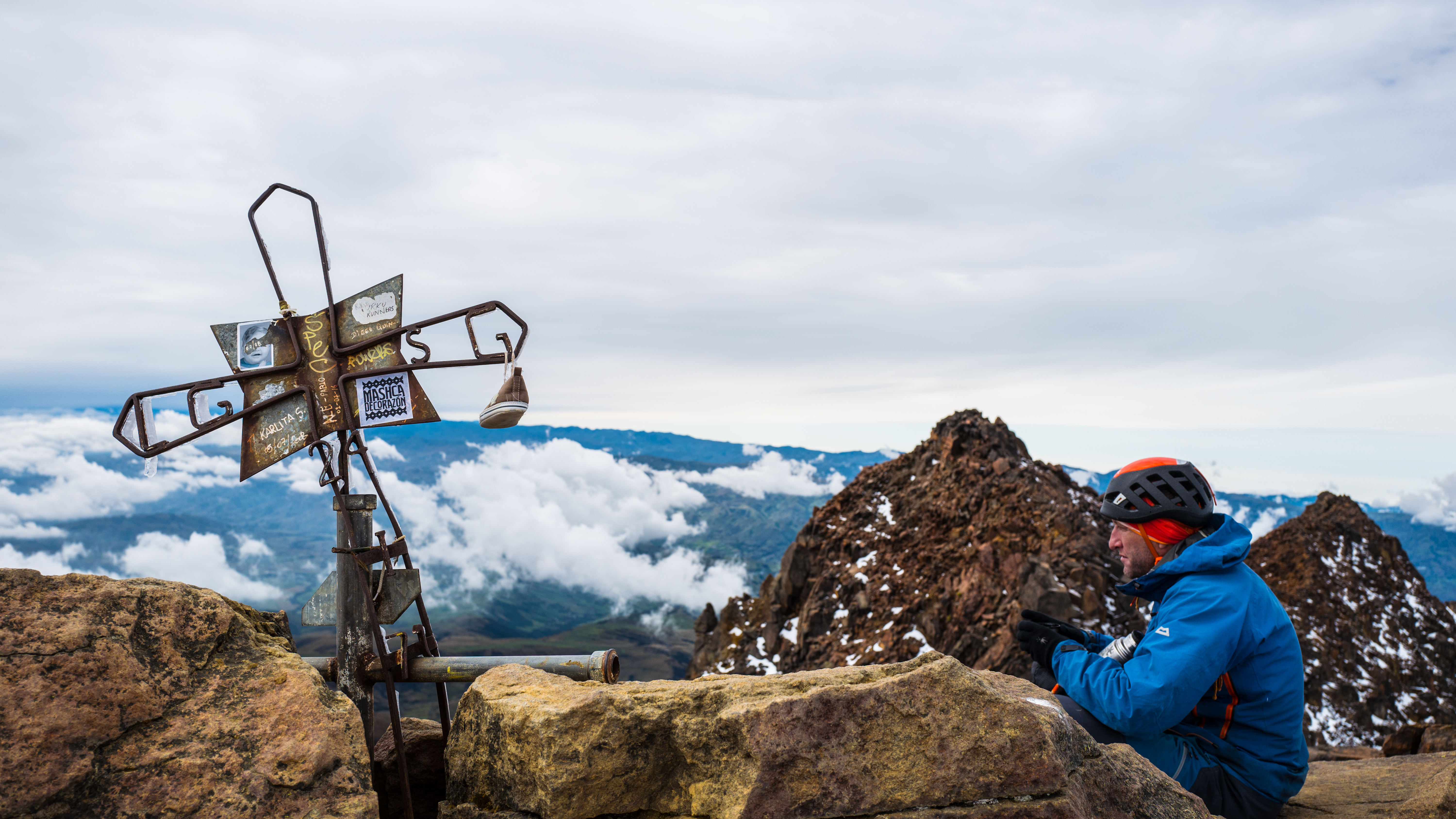 Back to the hut

Once we arrived back to the hut, it was completely empty.  The Germans’ guides had already grabbed all their gear so their clients could beeline directly to the parking lot.  All in all, we took about 3.5 hours round trip from the hut.  I think we climbed in good style – we moved very consistently and safely.  We stayed at a conversational pace for the most part.  I was pretty impressed with myself considering this was only my 3rd full day in Ecuador and already had climbed a 5000m+ peak.  We found a hat perfectly sitting on top of a big rock, completely frozen to it with rhyme ice all over. We chipped it out and brought it back to the hut in case its owner came back to claim it. The hat was quickly commandeered by Freddy, the hut operator.

Freddy made Nacho and I eggs and rice.  It was good, but I was glad that I overpacked food for this climb, two eggs were certainly not enough to refuel.  I quickly chomped downed some natural-type protein bar that I brought along because I knew I would be climbing the much more challenging Illiniza Sur in only a few hours.  We hopped into our sleeping bags, not because we were very overly exhausted, but because it was so dang cold without the previous 14 people in the hut to warm it up.  The Canadians got back an hour or so later but didn’t seem to be phased by the cold, typical.

GEAR: You can check out my gear list and full review here.

Continue to Illiniza Sur, part 2 of 4 in Ecuador the Hard Way. 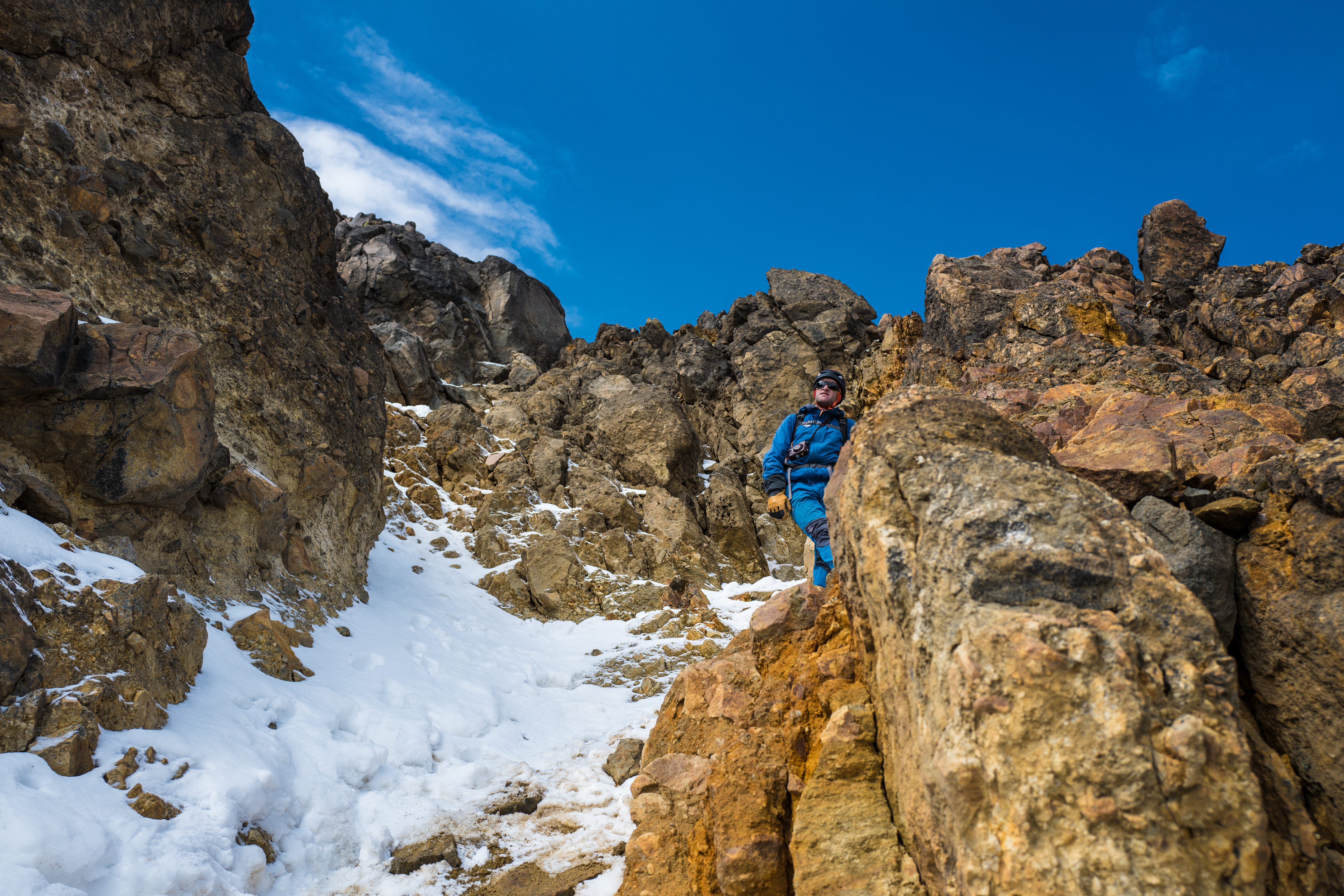 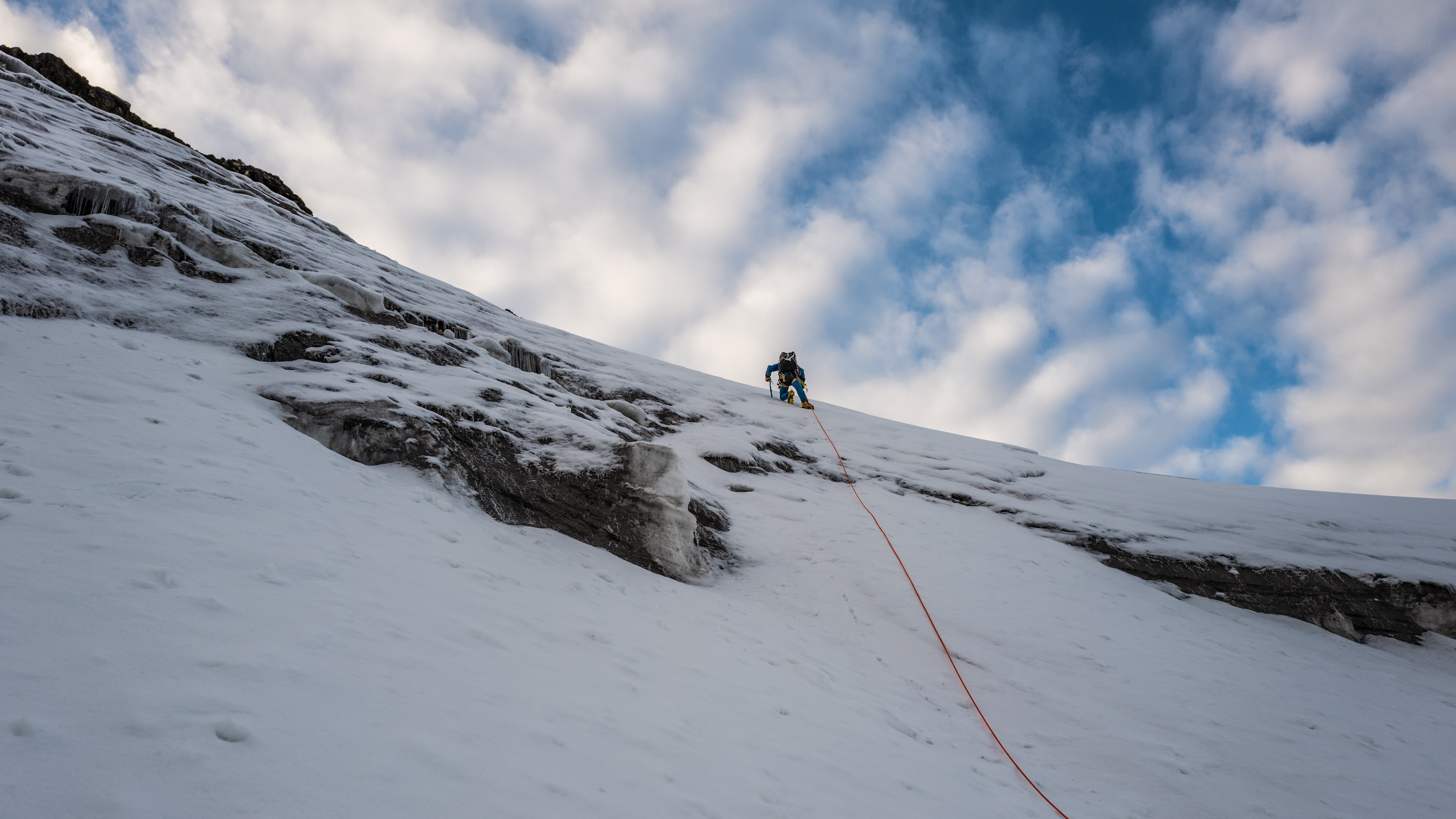 Continue to Illiniza Sur, part 2 of 4 in Ecuador the Hard Way.

“… Illiniza Sur, Illiniza Norte’s far less popular yet much more difficult sibling, was our main objective.  Up until 2009, there were two routes up Illiniza Sur, with the most popular route being La Rampa.  As of 2017, La Rampa is pretty much just a melted out rock shooting gallery, so we would be using the other route.  Funnily enough, nobody really seems to remember what the current route used to be called back when there were two routes.” [read full, Illniza Sur]