The only one of who had really ever thought of this route was Nacho. He brought his students from the IFMGA Alpine School to a different route up the West Face just a few weeks prior. They had better than expected conditions, making this route that would normally probably be a TD+ or greater more like a TD-. For a mere mortal like myself, this sounded like a great opportunity to nail a first ascent. The face would comprise of about 10 pitches of M5 mixed climbing and plenty of movement over the CB’s all too well known unconsolidated sugary snow, which in itself would earn a D+. What would bring it into the TD+ or greater territory would the blocky sporty mixed ridge that would need to be traversed to achieve the summit to descend the normal route. There is no other practical way to descend the route otherwise, making it quite committing. With the massive amounts of snow in the CB, the ridge *should* be covered making it for a straightforward snow ridge with a few mixed moves along the way.

From basecamp, the spectacular West Face is very visible. Even through the bad weather during the first couple days the face for whatever reason stayed clear. We felt pretty good about getting this done. We planned to wake up at 2am the following day to give it our best attempt.

Unfortunately, by 2am I managed to only get in about 3 hours of sleep- not really ideal for an expected 15 hour technical route. I’ve climbed with less sleep though, so I threw on my layers, packed my bag, and headed into our cook tent for breakfast. As soon as I got into the tent it was obvious that everybody was equally as wrecked as me. In fact, Michael was downright sick. We also got news that the weather forecast was looking pretty windy on our planned Ranrapalca days. Ranra was my primary objective, so it was easy for me to made the call to possibly cut Tocllaraju from the schedule in favor of getting a better weather day for Ranra. With that, we could climb Urus the following night after we all got a bit more sleep. I popped more benny and crawled back into my sleeping bag.

I wondered if my past year was too successful and if the odds were finally catching up with me on this trip. 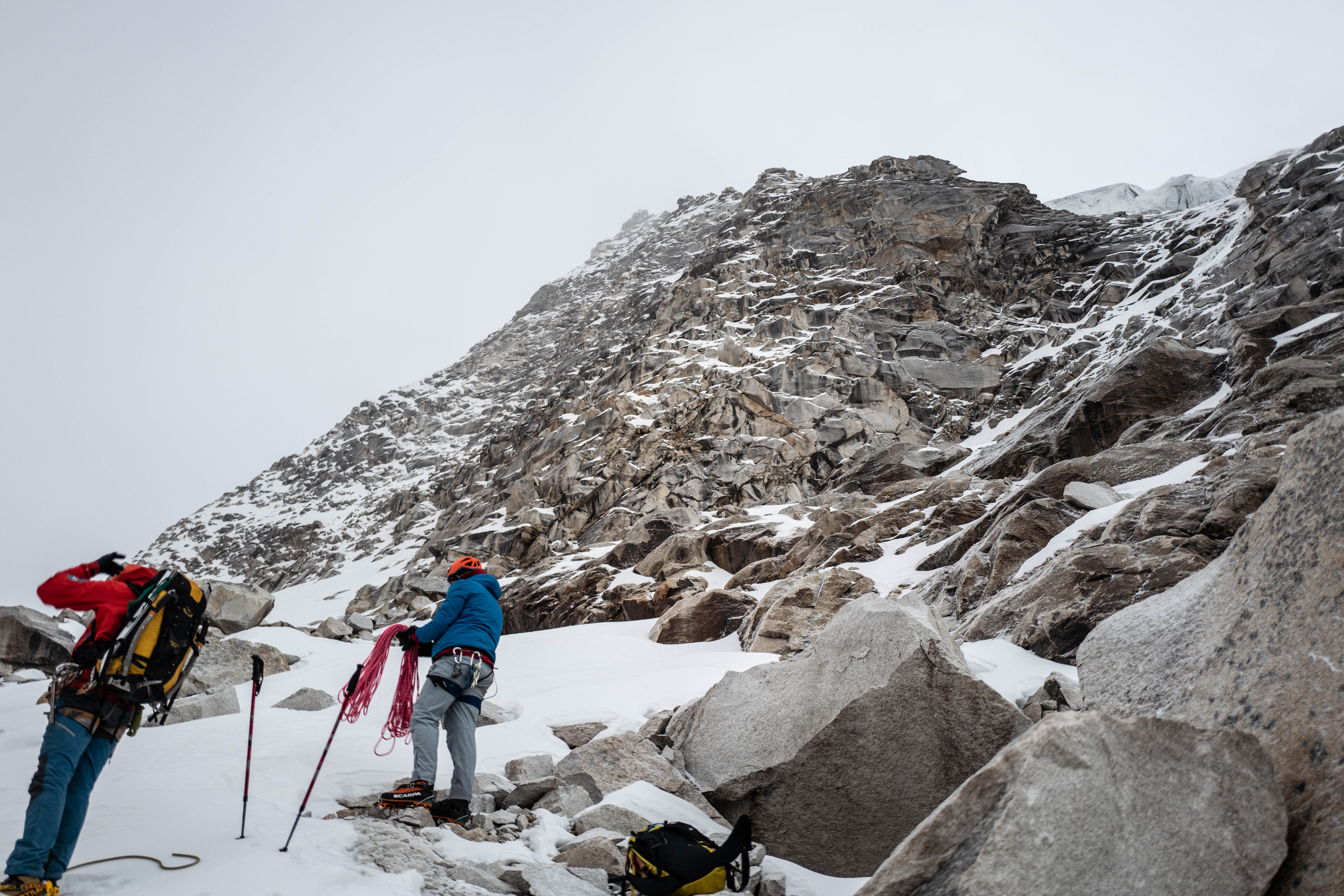 Once again, we woke up at 2am. The wind was reasonably mellow and the night was clear. Michael was unfortunately still feeling sick so he stayed behind. After a big breakfast of toast, peanut butter, and Nutella, by 3pm Nacho, Mitcher, Declan, and I began heading out to the route. Although quite early for the normal Urus Este route, we considered this a late start for a route of this length and level of seriousness. However, we needed sunlight to climb the technical sections, which pretty much the entirety of the route.

As we walked up the trail I could tell that my acclimatization was suffering. I had only had 2 days to really acclimatize at this altitude. I also knew that the joint medication I was taking a few days prior had a dehydrating factor, and with dehydration being the biggest enemy of acclimatization, it made sense that I wasn’t feeling great. I kept on pushing, knowing that the long day ahead of me would be tough. None of us really had any idea though. 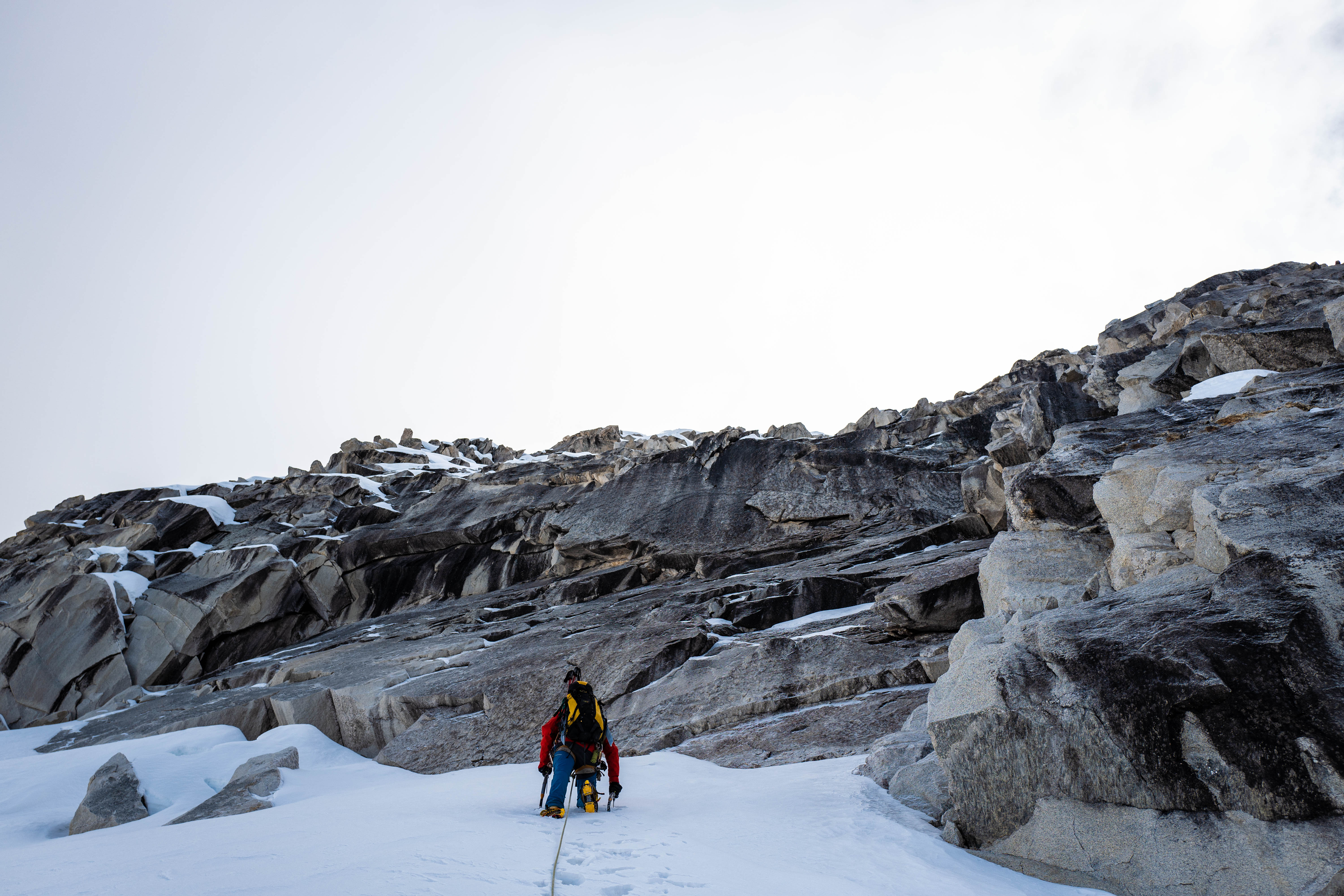 Taking a new line up the West Face of Urus Este was a choose-your-own-adventure situation. As we traversed the glacier below, there were clearly a ton of good, bad, and terrible choices up this thing. We chose one of the more southern lines making for a slightly longer ridge traverse, but it looked like like the “easiest” to tackle. Plus, with the ridge supposedly being mostly covered in snow, the traverse to the summit towards the north shouldn’t really be an issue. Again, we really had no idea though.

From there, we did a series of pitch after pitch of very sporty, exposed, but easily protected lines. M5 is definitely above my grade, so I used all the cheating techniques I knew- pulling on cams, the ole alpine knee, and even prussiking up a couple meters of overhang. I didn’t care though. I’ll save my climbing morals for the gym. This was absolutely neither the place or time to hone in skills.

(Unfortunately this was also neither the place nor time to take photos.)

I managed to take a fall when some near-vertical unconsolidated snow being blasted by the sun decided to let loose under me. Praying that a picket 30m above your head holds is never an ideal situation. That along with my shoulder being “kissed” by falling rock were stark reminders that this was indeed a serious route.

As we finished up the last pitch of a long line of even more steep unconsolidated unprotectable snow, we pulled ourselves onto the summit ridge. 3 hours to the glacier, 8 hours up the face, we were right on schedule.

It was right there though that we realized that this was not at all what we were expecting though. What lay ahead of us was an extremely sporty rock ridge, not at all covered in snow as we expected. I had never in my life looked at such a difficult route and decided to climb it. I knew I couldn’t do it. We had no option though. We didn’t have even close to enough gear to rappel the face. We began to slowly make our way up the ridge, doing some of the sportiest bouldering moves that I had ever done in the alpine. I was too terrified to appreciate the fact that I was actually pulling off these moves. We went slow. Very slow. The summit was just a few hundred meters away, but it was truly impossibly far.

There was absolutely no way I could pull off these moves over and over again without failure. We had blown tons of time moving only a few meters, and the time and wind began to catch up on us. At this point I was pretty sure we would be the center of the next rumor of tragedy swirling around Huaraz.

“Does anybody have extra cordellete?”

As I pulled up around a winding section of blocks, I saw Nacho, Mitcher, and Declan sitting on a huge westward facing block. In such a dire situation, it was actually comical to see 3 dudes just sitting there on a big rock chillin’.

“Does anybody have extra cordellete?”, Mitcher asked. I knew what they were thinking. Not having enough gear to rappel down the 600m west face we had just climbed, we would rappel off to the much shorter east face of the mountain. The east face could be descended in what looked like two or three rappels depending on how comfortable we felt downclimbing the loose shale rock. Unfortunately though, rappelling down to the east would require us to walk around the entire mountain back to camp. The walk would be through an alpine desert and would likely take the entire night. Between the cold nights and the high winds that we had been experiencing, let’s just say it wouldn’t be great. But it would be better to take our chances in the desert than to stay on the ridge. It was the clear lesser of two evils.

Saved by the gully

Nacho was first on rappel with me being next. When he yelled up that he was off the rappel, I began to make my way down. About half way down, he yelled up at me pointing out a very large snow gully that looked like it may actually go all the way to the summit, just from the other side of the mountain. That would mean that we could descend from the standard route! It wasn’t close and we had no way to know that it didn’t lead to nowhere, but we all agreed that it was worth the chance.

We made our way through the shale and snow penalties to the bottom of the gully. No way to know where it actually went, we began working our way up. Nacho and Mitcher were up front. Night began to fall, it was now 6pm, hour 16 for us on the mountain. Tired, cold, dehydrated, and hungry, we were all motivated to get out. We climbed and climbed and climbed, inhaling buckets of shale dust. The mixed moved over the shale in the dark were challenging, but we didn’t care. We pushed on.

I strapped my headlamp back on and threw in my spare battery pack. Apparently, I never programmed my spare battery pack, and Petzl thinks that a good default setting is basically making the headlamp as dim as possible. The climbing on the shale got sporty and I was impressed with my mixed moves in the almost complete dark. I really hated that headlamp.

Eventually the gully did wrap around to the summit. Hour 18, too exhausted to even care about tapping the summit a few meters away from us, we made our way down. With my shitty headlamp, we made it back to basecamp at hour 20.

Coming back, we were completely destroyed. None of us were even close to being upset about not touching the summit.

The previous night I had packed everything into my duffle just in case the heavy winds blew our tents out. I had picked up a cough from the east face’s infinite amount of scree that we climbed through, so blowing up my sleeping pad was particularly annoying. We met in our cook tent and sat there quietly, trying to muster our appetites so we could be recovered enough for whatever lay ahead. After pushing the body that hard, every bite feels like a punch in the stomach.

The next morning, Michael told us that he had a hard deadline of seeing our headlamps crossing over the ridge by 8pm before he called for rescue (whatever that means in the Cordeillra Blanca, anyways). Apparently our little epic had made a rattle at basecamp, so he and quite a few others at basecamp were relieved when they saw our headlamps pop up at 7:50pm.

Over the next few days I spent a lot of time in the hut waiting out bad weather.

During the down time, I hung out with Brad Johnson a bit. I don’t think we’ll be seeing this route in Classic Climbs of the Cordillera Blanca, Volume 3 though.