Coming off my objectively bad trip to the Cordillera Blanca, I really just did not feel like climbing. I had a trip to Mount Robson planned for the end of August, but due to getting kissed by a little rockfall on Urus Este’s West Face and a whole lotta smoke in Canada, it didn’t seem like success was likely.  I was left with an empty calendar for all of August, which I was feeling totally fine with for a little bit.  Eventually though, as all climbers experience, my addiction crept back and I was itching to get back into the alpine.  With the heavy smoke coming from British Columbia (shout out to my hometown!), our glaciers in the PNW were pretty messed up.  Alpine rock isn’t my favorite type of climbing, but I figured that a good alpine rock route would be the most appropriate thing.

Jere and I planned to meet up at the Ranger Station at 8:30am to grab our permits and blue bags. The previous night I had done a (too) quick packing job, pulling gear from my still-packed Cordillera Blanca duffels and dumping it into my much smaller pack that I would be taking on this climb.  Doing a single nighter for a peak like this is always kind of funny to pack for, it’s not quite fast-and-light, but is also definitely not expeditionary-and-slow. Unfortunately in the mix I forgot to pack my titanium spoon and my sunscreen. Jere was cool enough to hook a bro up though. 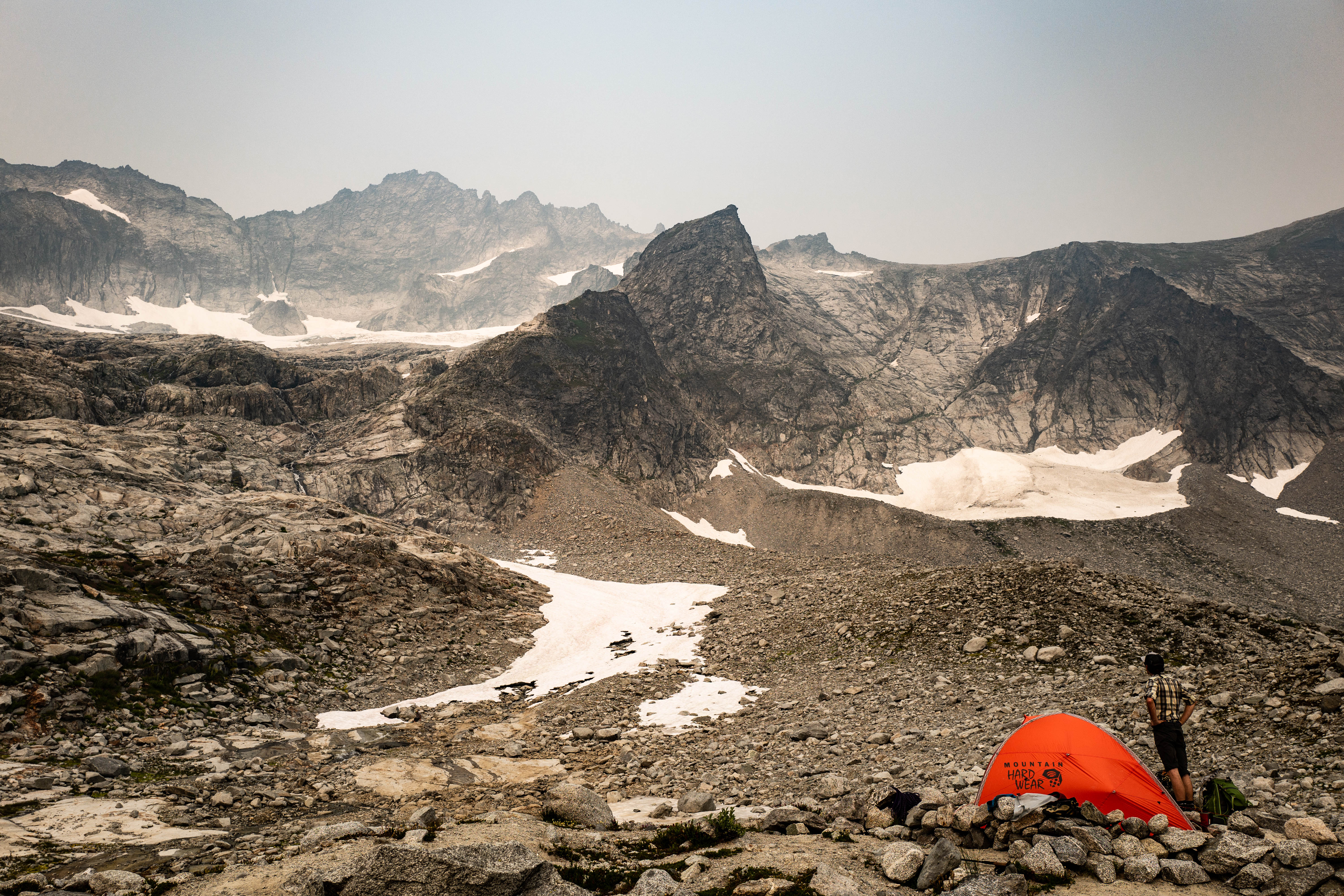 One of the considerations I have had for a long time has been spending a summer season climbing a bunch of alpine routes close to home. The irony of me leaving for peaks abroad during the core of the climbing season here has never been lost on me.  For that, I have never actually had the time to climb in the Boston Basin.  I always had it in my mind that if I were to make the hike in, I should spend at least 5 days climbing.  Actually doing the hike in, I realized that is actually an easy 3-4 hour hike (with carrying weight) so it’s actually totally reasonable to just climb there for a day or two.  I still want to spend a good amount of time climbing out of the Basin, so I was excited to use this as an opportunity to scope things out to get a picture of how to prep for a longer trip.

Big smoke is the name of a hot sauce too

After the quick hike in, Jere and I set up the tent and I walked down to the glacial stream beside us to collect water to boil.  We sat around and talked about food while eating our food.  Food seems to always be on the mind of climbers.

The smoke had been thickening up for the past few hours and it began to obfuscate our visibility to the route.  We could quite plainly see that the steep snow couloir to gain the West Ridge was 100% out.  With the recent heat and smoke, came in expecting to go up the Catscratch Gullies, but I had still been hopefully to get a bit more steep snow climbing in before the end of the season.  I figured it would be cool to come back and climb it again in the future anyways. 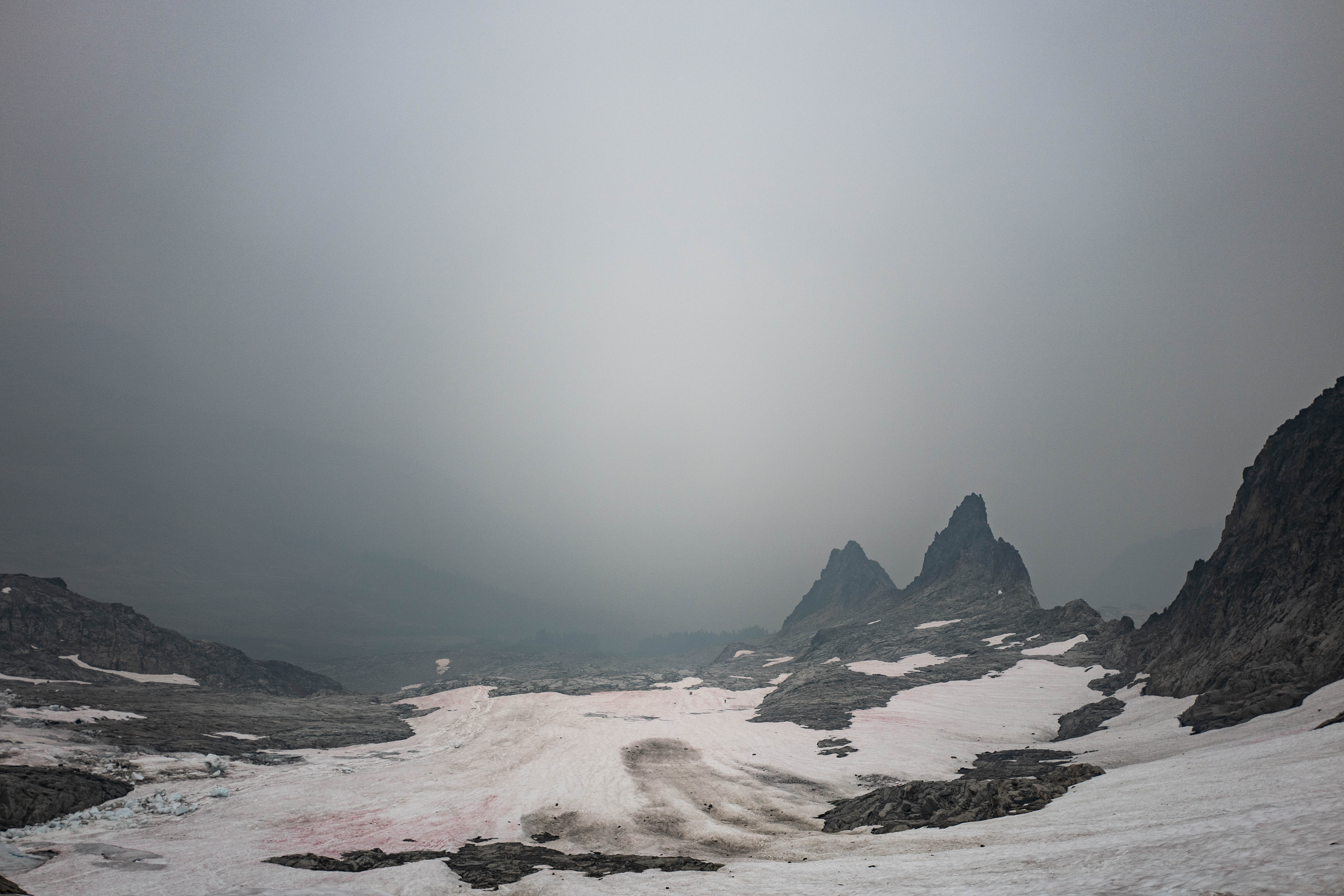 We figured we would to a late alpine start, we wouldn’t spend really any time on exposed glacial terrain, so it would be preferable to climb in the sun.  We gave ourselves a 4:30am start time with the expectation of climbing the route camp to camp in 10 hours.  I fell asleep easily after purposefully getting a minimal amount of sleep the previous night.  I woke up a few times gasping for air and coughing in the middle of the night.  The smoke had got really strong.  I wrapped a Buff around my mouth and hoped that whatever was going on in my lungs wasn’t too cancerous.

The following morning I woke up feeling like I had been punched in the chest.  It was the exact same feeling I have had the morning after trying to smoke a cigar.  I have tried to smoke a cigar exactly 3 times in my life.  For whatever reason I have never been able to figure out how to suck in the smoke without inhaling it.  I guess inhaling forest fire smoke all night had a similar effect.  I figured I would be fine and busted open my Mountain House granola and heated up some ramen. 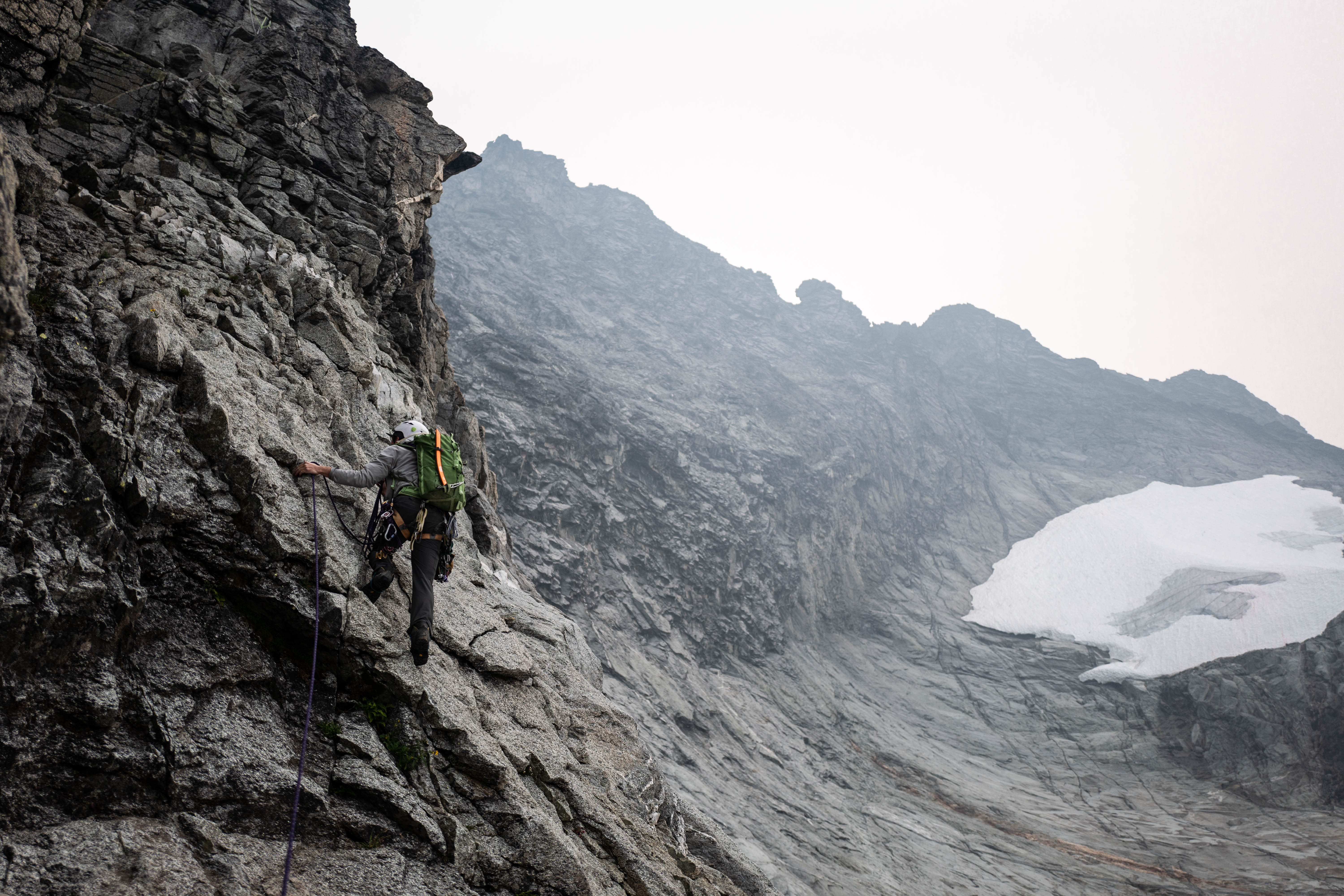 The shoddy dancer blames his shoes

By 4:40am we took off towards the route in the dark.  The granite slabs surrounding the base proved to be slippery in the dark.  I made a mental note that coming down these I’d have to be extra ginger.  My footwear was pretty poorly curated for this climb.  I brought Nepal Cube GTX boots rather than something significantly lighter.  After spending a lot longer than appropriate climbing the Catscrach Gullies, I had no choice but to switch to my TC Pros I had stashed in my pack.  I pulled up a few loose rocks and ditched my boots and snow gear.

After switching into my rock shoes, the climb began to get really enjoyable to me.  Instead of spending far too long searching for foot placements, I could just focus on the excitement of the scenic ridge with tons of exposure on both sides.  The West Ridge of Forbidden Peak is truly a classic route.  The summit ridge itself was a lot shorter than I expected, but every section on it is very memorable. 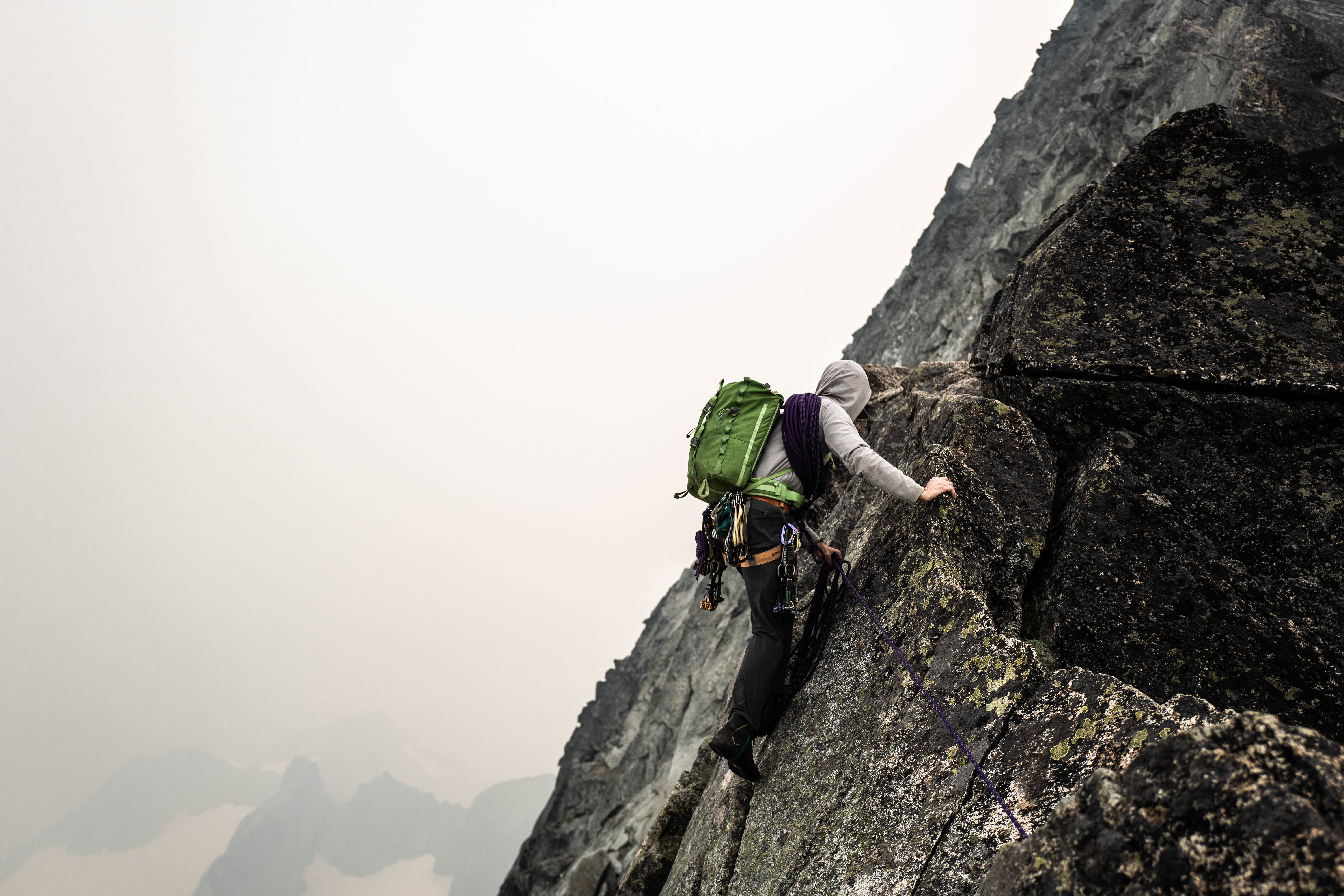 We climbed it for the nookie!

What felt like in almost no time, we were pulling our way to the final gendarme.  We had been climbing with another team in parallel, which had been quite entertaining.  With 5.6 grade, we kept the conversation going, mostly reminiscing of the good days when Limp Bizkit was still cool.  I won’t pretend that we didn’t bust out a few lyrics.  Needless to say, we climbed this for the nookie! And shove it up your, YEAH! 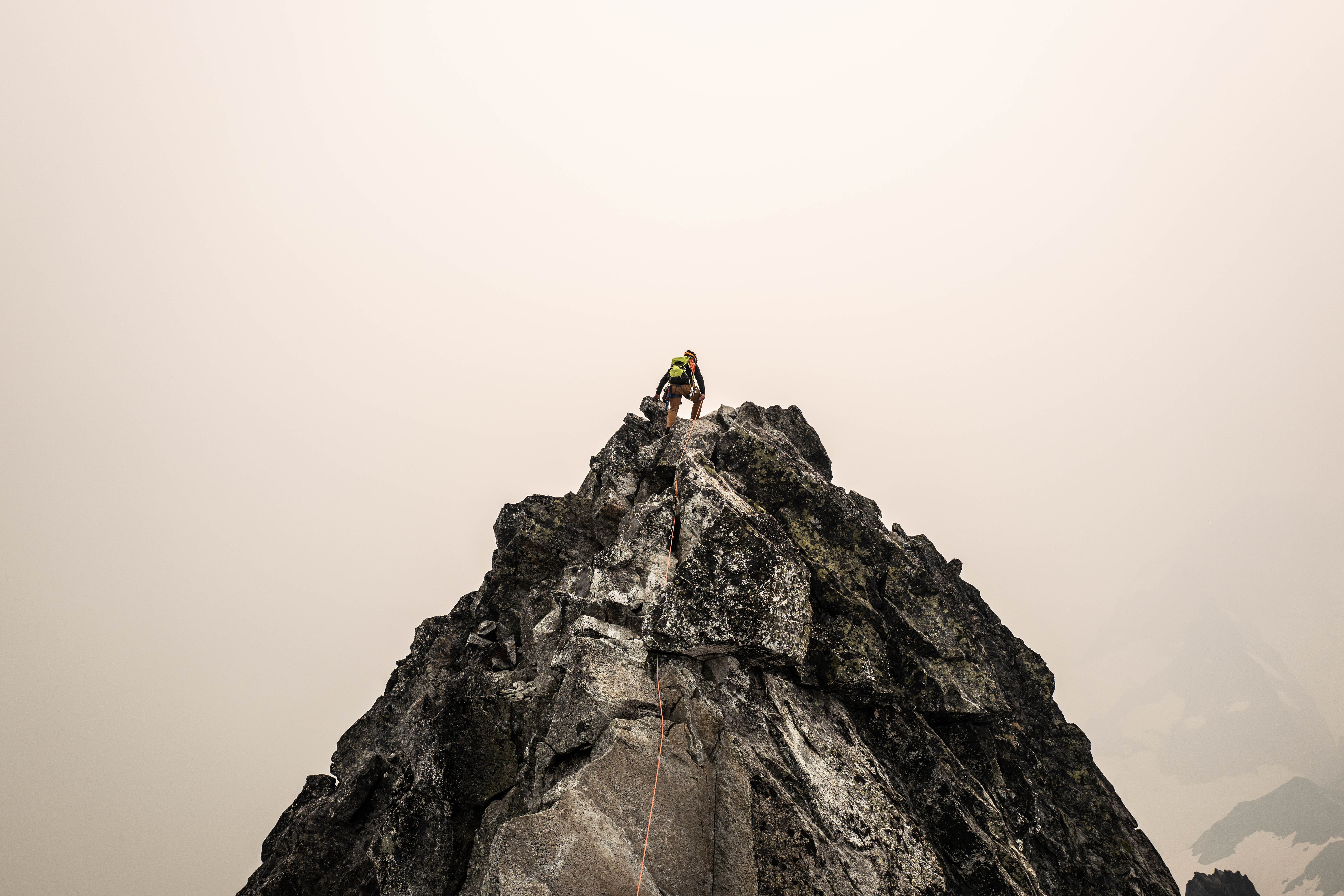 We chilled on the summit and took a few photos in the smoke before deciding to head back down.  Our slow start with me climbing the Catscratch Gullies in my big boots had put us a bit behind schedule, so we wanted to hustle. We rapped the majority of the route, with some fun sections of downclimbing.  Downclimbing the whole thing would have probably been pretty tedious but good practice.  Once we got back to the little saddle before the ridge, I grabbed by stashed boots and gear and took an epic #2.  I’ll tell you what, that was the true classic of the day.

We slid down the snow without crampons, packed up our tend, and hiked down to the car.  All in all, it was a great classically fun climb.  I can’t wait to spend more days in the Basin. Also, I know knew what it felt like to be a perfectly smoked Texas brisket. 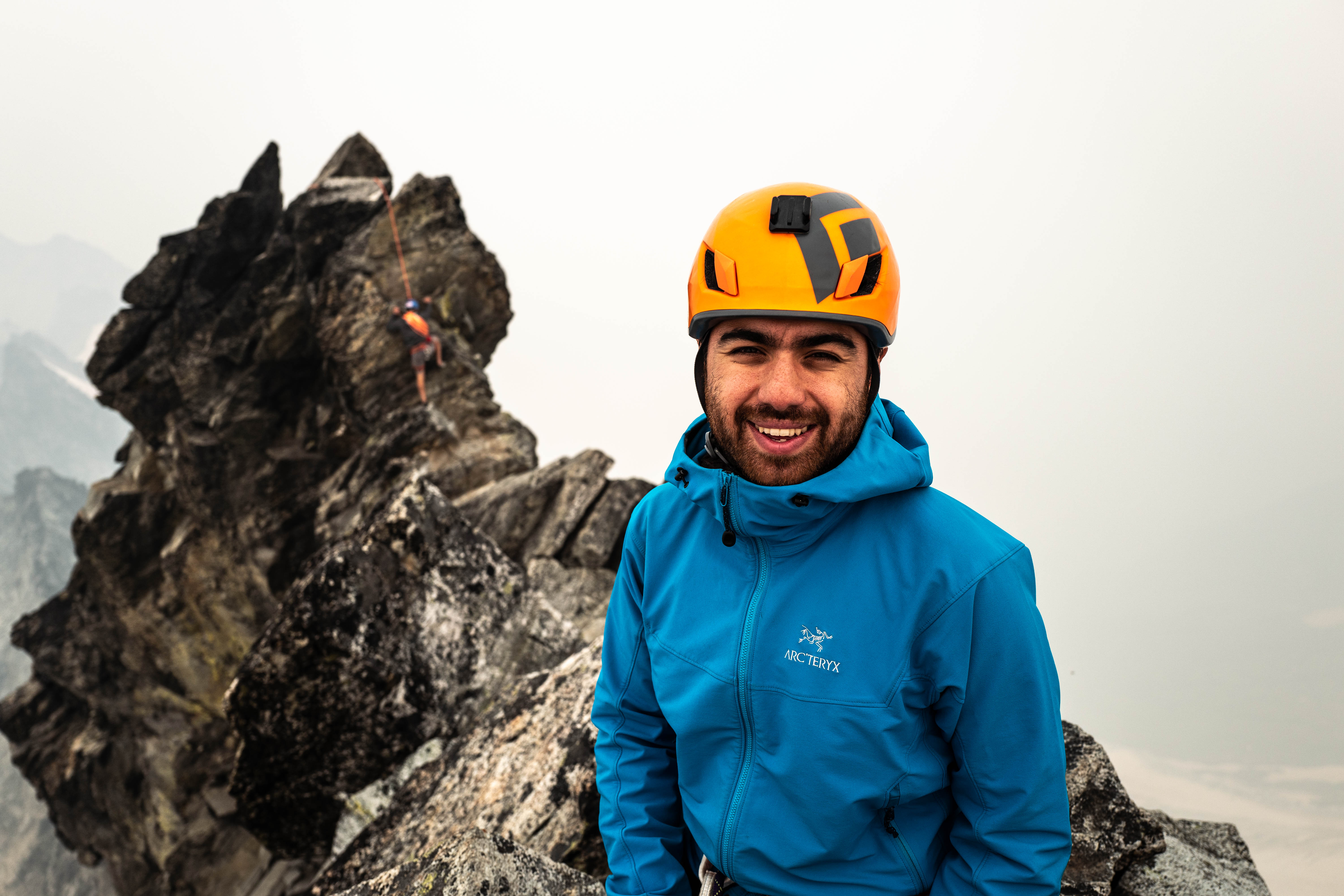 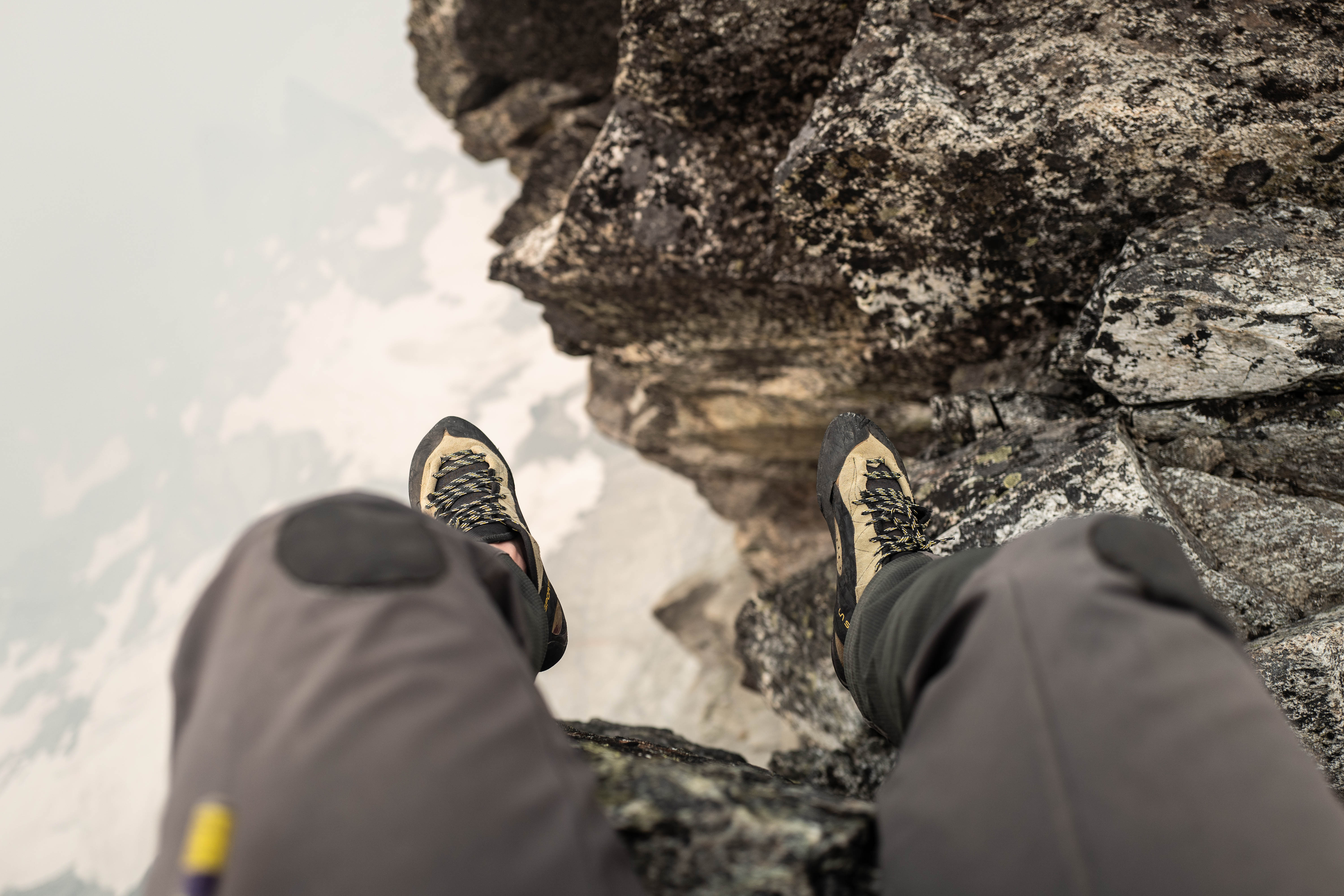 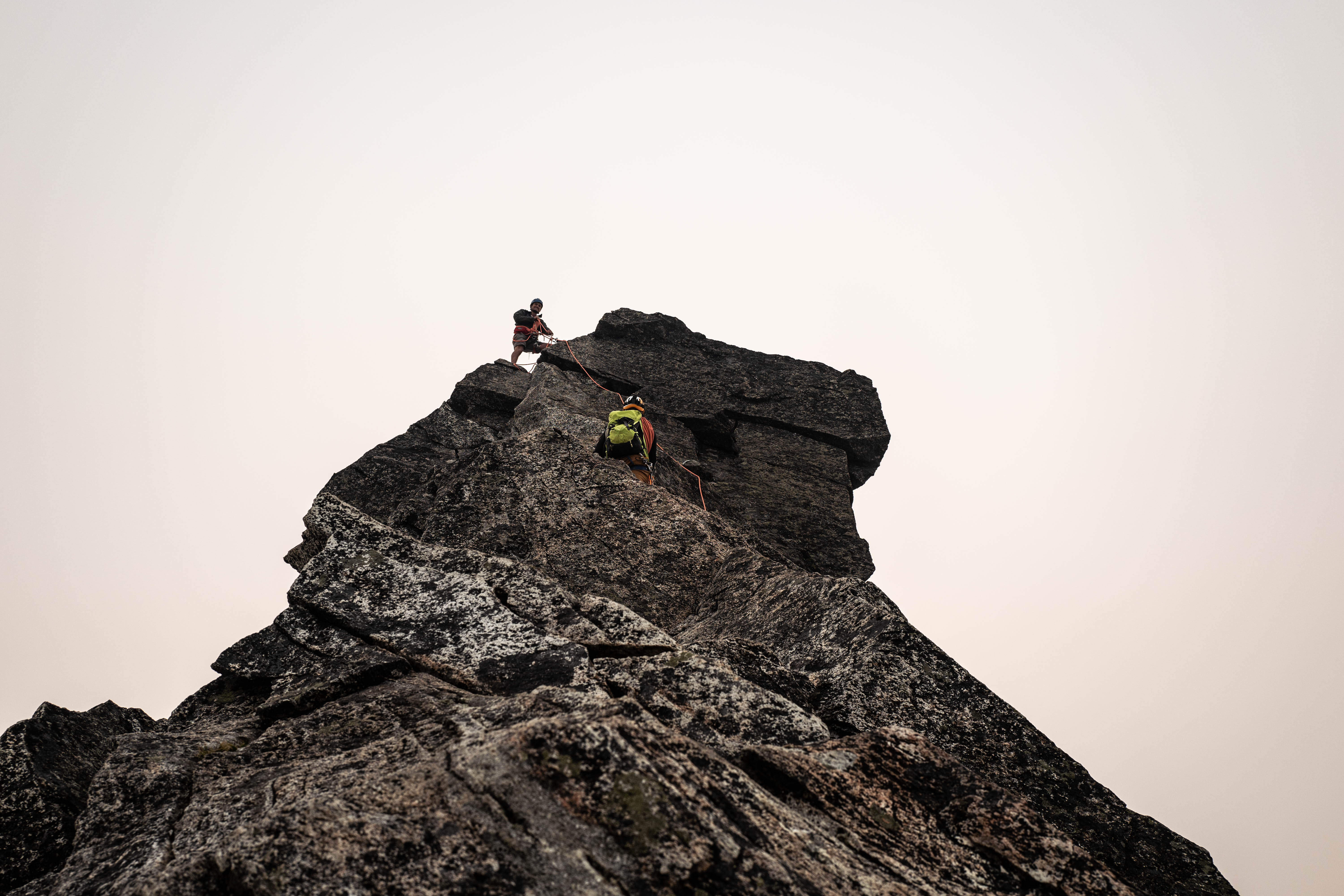 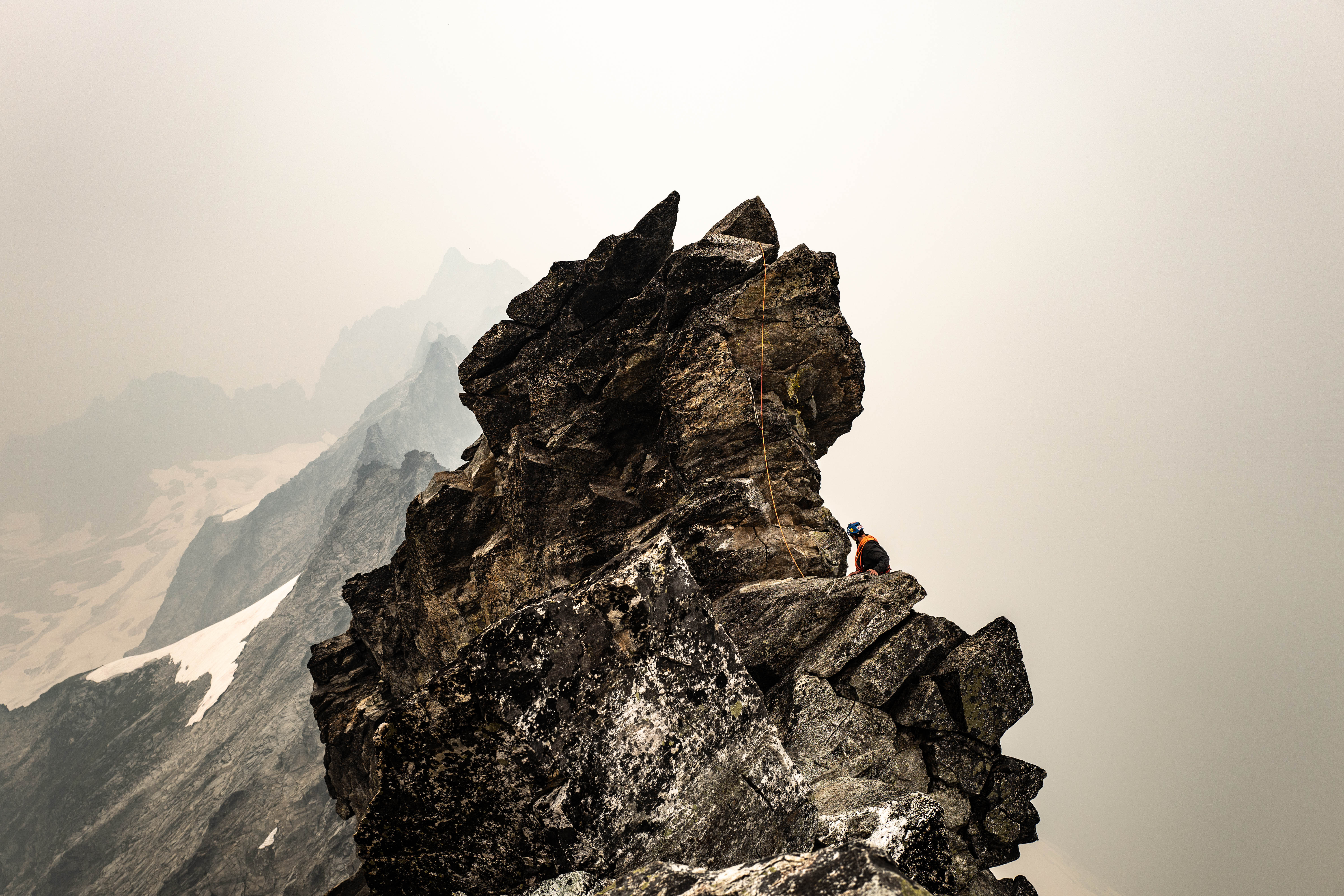 UP Next, How about FORBIDDEN’s BIGGEr RIDGE?

2018, sitting on the summit of Forbidden having just climbed the classic West Ridge, Jere and I watched a team make their way up the North Ridge. The route just struck me. The increased solitude, the variety of terrain, and the overall burliness of the ridge just had me impressed. It looked like the true…